It’s been a little over a week since I was last in the studio. I’ve worked on a couple of things from home but, after realizing that I can’t abide working from photos anymore, that quickly lost its joy. Snow, ice, no car, grading, and job applications have provided far to many legitimate excuses – but now I’m starting to itch.

I haven’t started my bird-devouring plant painting yet (perhaps that should be the title?) and I was so excited about it before holiday break started. It’s that silly inertia switch again.I’ve been thinking about this piece a lot though and actually had a dream about it last night…

I’m wondering how un-wifey it would be to spend some time in the studio on Christmas Eve when my husband is actually off work.

I have been reading a lot in preparation for my thesis and my class next semester. I’m trying to come up with interesting project ideas for my color theory students and I’m restructuring the course so that it’s a little more organic as far as the integration of material is concerned. I picked up several books at the library about mandalas to research one project idea and stumbled across a book about labyrinths. I picked it up too, thinking “who knows?”

Subsequently, I have become engrossed in the idea of  the labyrinth – so much so that it’s starting to manifest in my plans for artworks despite being in the (roughly) 9th hour of my thesis work. What am I doing to myself!?

Aside from my trepidation, I can’t ignore the profound effect this unexpected revelation has had.

The author of Labyrinth for the Spirit, Jim Buchanan, has surprised me a bit. When I first flipped through the book I thought “for the Spirit? Really?” and expected a high level of new age drippiness in the content portion. The book has great images though so I felt it was at least worth a more in-depth browsing.

Despite my expectations, Buchanan is not a hippy-dippy writer – impassioned at times, but not sappy. Or perhaps I just respond because what is discussed strikes a chord.

Buchanan talks about the differences between mazes and labyrinths: “a maze” Buchanan explains “hides its secret turns and dead ends, and employs multiple paths” while a labyrinth “has one path leading you into the center and then out again” with no deception (9). 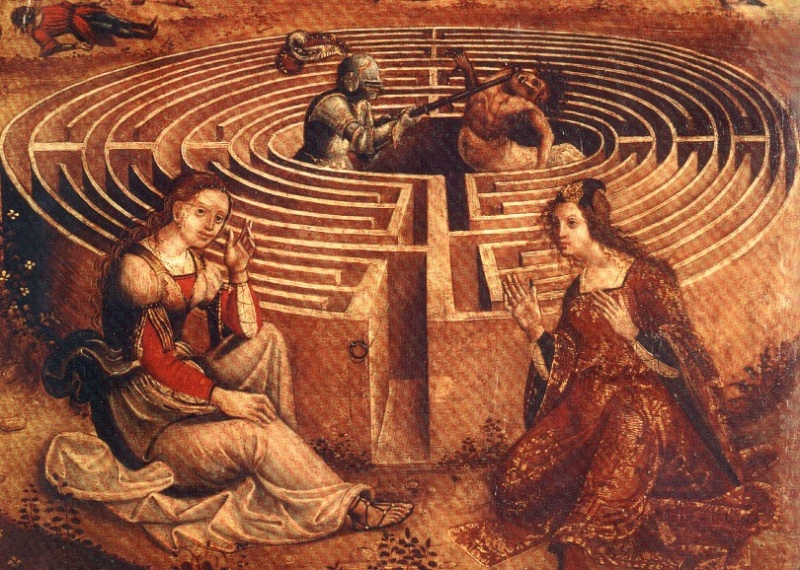 The history of the labyrinth is fairly multi-layered and extends across a variety of cultures. The form has been of primary interest to religious sects due to its symbolism and meditative nature and in a contemporary context, continues to adopt a more spiritual connotation.

Buchanan cites credible historians to support his writing. One such source, Patrick Conty, suggests that the labyrinth is a metaphor for the mind/body connection. As this is an area I’m currently researching for my thesis (Hegel, Zizec, Elkins), I’m curious to read more about this theory as it is only touched on briefly.

“As our ability to dissect, explore and ‘know’ the workings of our body increases,” Buchanan says, “we are still not closer to accessing the soul and spirit.” Because “with a drawn image there is more opportunity to develop the mythological iconography” Buchanan believes that the labyrinthine form can provide a window into that which is tangible and real but virtually inaccessible to our minds (10-11). Buchanan quotes Conty: “The ultimate meaning of the myth is not of the same nature as the concrete non-conceptual logic with which it is built” (11). In Lacanian terms this translates as the Imaginary Real vs. the Symbolic Real.

There is something that is intrinsically meditative and calming in the creation of  patterning within my work. As one of my favorite indulgences, I have to be careful to use pattern appropriately and in moderation and not get carried away. The motifs I include in my work are laid out meticulously beforehand, transferred to my surface, and then laboriously painted or drawn so that the lines are clean and precise. 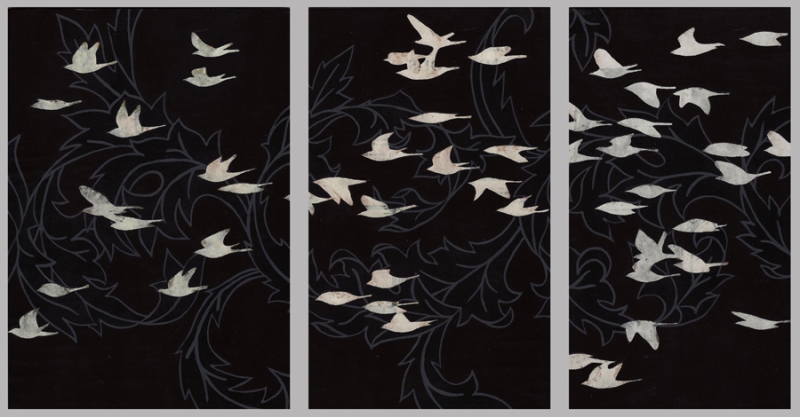 There is no unexpected element in the execution of the final pattern, my brush simply follows a line until it joins with another line which is then followed until it joins with another line and so on until the end of the work – almost exactly following the description of a labyrinth. The only struggle is to stay on the path and see it through to the end.

And yes, this process is somewhat spiritual for me because it brings me peace.

In works which are already filled with layer upon layer of dualistic ideas, I have discovered yet one more element to add to the list.

I am contemplating a more complicated labyrinth pattern with embedded motifs and imagery that can only be discovered if you allow your eye to follow a path for long enough – a stand alone work with nothing but pattern.

Sometimes it’s nice to just follow a path and not know what the end holds in store for you, but that there will be an end at some point if you’re patient enough to see things through. I started looking for project ideas, stumbled upon the idea of the labyrinth from an entirely new perspective, and ended up with a renewed sense of purpose and drive to get out of my books and back into the studio as a result.

Maybe after lunch I can bribe my dear man with some homemade cookies and sneak away for a couple of hours. We’ve been together for a decade now… I’m sure he’ll just give me that knowing shake of his head (with eye roll for effect), kiss me on my forehead, and send me off with a pat on the ass… he’s a good one like that.

(Note: you can read the entire Introduction and Chapter 1 in the “Click to Look Inside” option on Amazon’s listing for Labyrinth for the Spirit.)