As I wrap up the term I’ve been working frantically to both grade student projects and also work on the independent teacher student collaborations that were started a few weeks ago. I have been really excited by the work students are returning to me. The contributions each has added to my own work has given me some really interesting challenges that are making me see my own work in a new way. Here are a couple more of the collaborations that were completed last week.

Kathrin loves media. She’s probably one of the most prolific students I’ve ever had when it comes to exploration with mixed media and this semester is no different. She’s been taking me for Intermediate Drawing – a course all about new media combinations – and she’s really taken her creative efforts into some new and exciting places.

When I challenged this class to throw anything they wanted at me – to “get even” with me for pushing them out of their own comfort zone (which may have been a bad idea at the time) if they wanted – Kathrin decided to present me with something she knew I hadn’t worked with before: modelling paste and gold paint! 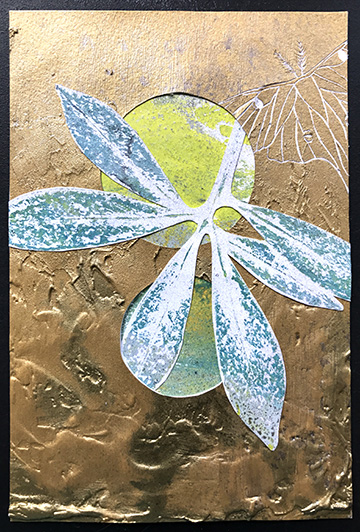 The piece she started for me (which was really hard to photograph accurately until I added to it) was void of subject matter but difficult to work with. She had coated paper with modelling paste and coated it with gold leaf paint and an ink wash. The paper was as heavy as mat board but the highly textured and plasticized surface was a new one for me – I generally avoid polymers in my own work because it is easier to work with water-based media. 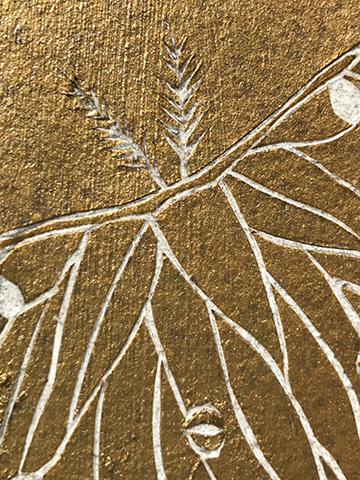 I decided to cut into this surface and reveal other layers and try to push the idea of texture even further. Kathrin used this technique to complete a project in class and had struggled to find media to add to the surface. As a way to inspire her to push herself futher, I chose to carve into the surface to make marks instead of work back into it additively. This was a great decision and it worked well using only an X-Acto knife. The circles were completely removed and I placed a sheet of some of my previous experiments with gelli plates behind. These prints were also used to create the leaf that I placed both in and out of the windows. 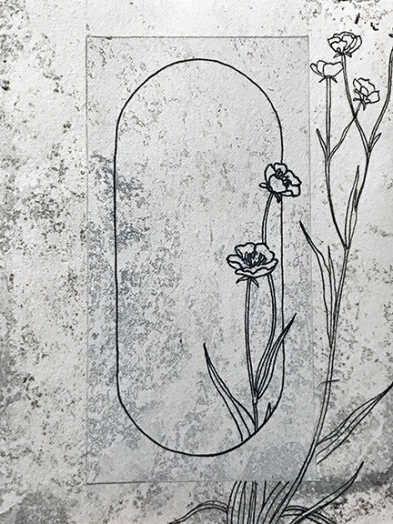 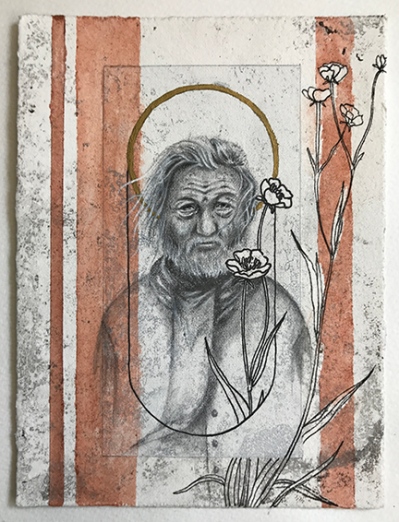 Kathrin’s contributions (right) to my own piece (on the left) were very indicative of her own style. She creates a lot of works with old men in them so I found it quite fitting that she put this into my work as well. I don’t know what I’ll do to complete it – I have not worked with figures very much recently so this will be a great opportunity for me to venture outside of my own comfort zone.

Kayla used to be an engineering major before she (came to her senses and) switched to art – she intends to pursue a career as an industrial designer and I think she is going to be great at this. She has a very clean and graphic aesthetic that I enjoy and she has recently been playing around a little with typography.

When she gave me the “be my valentine” text above (left) I didn’t have a clue what to do. I didn’t want to do a bunch of flowers or shells because that is not Kayla’s cup of tea so I tried to come up with something she would appreciate. She has a betta fish named Dave (which she loves more than anything in the world) and so I chose to give Dave a puffer fish friend (as they’re my favorite).

I cut out her text and mounted it on a piece of watercolor paper that had been misted with a copper Dylusions spray and then added the fish (also created on watercolor paper) on top. She seemed pretty happy with the result and so was I – in fact I created an entire mixed-media demo based on the little puffer fish after that (I’ll share later). 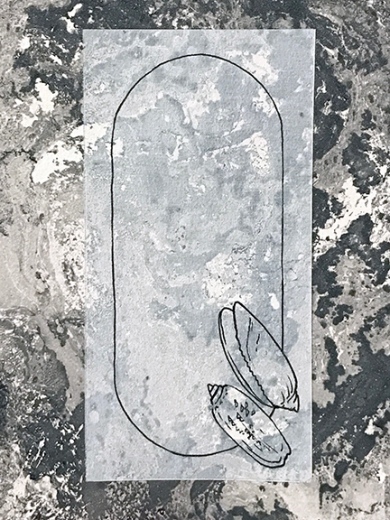 Kayla’s addition (right) to my own work (left) was quite charming – a dinosaur! She took a similar path it seems and gave me something she knew I’d love too (I’ve always had a thing for dinos). I love this. I almost don’t want to add anything to it! But I will… I just haven’t decided what yet.