I appears I’m back to animals in my work again – there’s an ebb and flow to this as I tend to move away from the depiction of animals for a time, focusing instead on plants or people, and then one day I find myself thinking “yep, there you are again” and I’m knee deep in things that creep, crawl, or fly. I’m actually still “working” (i.e. loosely playing around and researching) two other “bodies” of work but despite this, I’ve started working with actual skeletal remains of animals in a new direction I’ve been referring to as “Beyond the Veil”.

As part of this new path (body of work seems too premature at the moment) I’ve had to seek out animal bones – this is actually much harder than you might think when all your friends are artists who – if they’ve collected anything themselves – are rather tight-fisted about their treasures (and rightly so). You can buy them online but origins are sketchy at times and the costs can be steep. Why can’t I live in the country anymore!!!

I have however formed a nice connection with a friend of a friend who is a bow hunter and modern day naturalist – this guys is the SHIT. With his help I’m looking at a year or a year and half of collecting to obtain enough bones to build a show.

Basically, over the next year +  he’ll collect bones from carcasses he’s been watching out in the woods for months (like two coyotes, an entire deer, ducks, etc.) and in exchange, he’s going to get first dibs on whatever work he would like from the collection once I’ve gotten the work together. I see this as being a very fortuitous relationship!

Case in point – two days before my birthday (best. present. ever) I received this beauty in the mail: 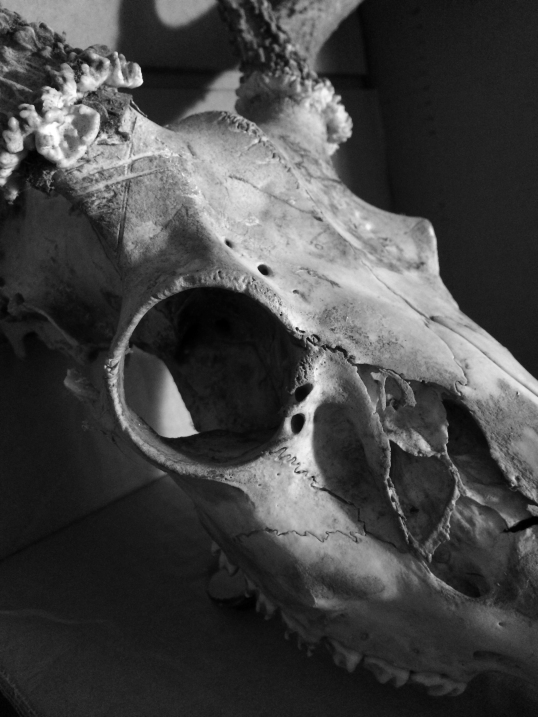 I literally almost cried – I wasn’t expecting something this awesome. I haven’t gotten the time to clean it yet (which is why it’s still in the box at the moment – cats are CRAZED around it) but that’s on the schedule soon enough. I eventually plan to draw directly on the skull and antlers – this will take some planning and trial and error before I attempt it.

The good part of this arrangement is that I know where the bones are coming from – I know their story, or at least part of it. This skull for instance was from a deer that probably feel victim to a virus that’s pretty prevalent in overly populated areas of deer. The virus causes the animal to get a high fever and they seek the water to cool themselves. This animal was found near water and at some point another hunter or hiker tried to hack the antlers off but potentially got dissuaded by the smell and state of decay of the animal and let it be. You can see the hack marks in the second photo. As the work itself will hopefully speak of humanities sorted idealized objectification of animals and nature I find this aspect intriguing…. but more research and development is certainly needed!

In the meantime I’m starting to work with the imagery of the skull and patterning and such. I am hoping to create detailed labyrinthine patterns (think Book of Kells minus the celtic influence with a dash of William Morris) with a myriad of embedded creatures, men, natural elements, etc. that create a meditative but deceptively alluring and decorative appeal. I’m looking into this history of rituals and cultures who have drawn on skulls and hopefully that will help me develop the ideas a bit more as I go.

For the first time I’ve decided to create a work from start to finish in the presence of my students – this has made me nervous in the past but I’m teaching Watercolor again this semester and it seems conducive and a much more engaging way to demonstrate how basic watercolor techniques can be used in the creation of an image. The subject of this demo/piece – you guessed it! So far so good – the students seem to support this idea and of course – the skull is a big hit. I’m documenting all the stages for the course and will post them later here – I realize now that this will be the first real visual break down of my process that I’ve shared on this blog.