Blackberry dyes can create a range of purply blue hues when prepared in different ways, and although not as impermanent as some edible sources of natural dyes (like cabbage or Turmeric), blackberries are one of my favorite ways to alter embroidery threads (“floss”) or fabrics. 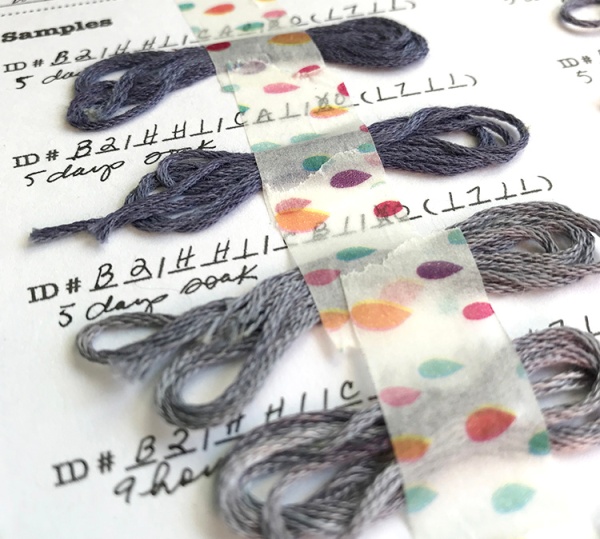 As adjective dyes (really, they’re stains) they require the introduction of a mordant to assist the bonding of the colorant to the fiber. As such, they require different types of preparation in order to achieve better results.

I started with simply dying tester skeins of 100% white cotton DMC threads. I bought a large spool of this because it was a LOT cheaper than purchasing individual skeins and make small bundles of 5 individual 1 yard lengths to test out different dyes and treatments. To pre-mordant my threads I put a few tablespoons of alum in my small stainless steel pot and bring it to a boil and then simmer it for about an hour. I wring these out gently and then hang them to dry. Later, whenever I want to dye them I just thoroughly re-wet them – no need to mordant them again prior to dying. I’ve found it’s easiest to prep a bunch all at once to use in the future.

When I made my first blackberry dye I boiled 16 ounces of berries in a cast iron pot with about 3 cups of water and allowed it to reduce at a low boil for awhile. I didn’t realize at the time that (A) cast iron is not a great choice – the iron acts as a mordant that darkens of “saddens” colors and (B) it’s not common practice to heat the hell out of dye stuffs because sometimes it impacts the color. After I boiled out almost all the water (my bad) I strained the juice and put it into glass jars. I threw in skeins of pre-mordanted thread and then stashed the jars in my kitchen window where there is partial sun (another thing that wasn’t probably the best idea… mold and all). I later moved jars to a cool dark location.

I took thread out periodically between 5 and 48 hours and even allowed (forgot) a couple in there for over a week before removing. I washed the threads using only water as well as Dawn dish-washing liquid (the Dawn did alter color slightly) and also experimented with dipping threads post-dye in vinegar to alter the color.

At first this was disappointing because I rather like the color when it’s first removed from dye jar, however, dipping it in vinegar returns the color back to the way it looks right after pulling it out of the jar. When it’s rinsed out too much, however, it tends to go back. When I looked up ways to stabilize this I learned that salt is customary when using berries in dying. 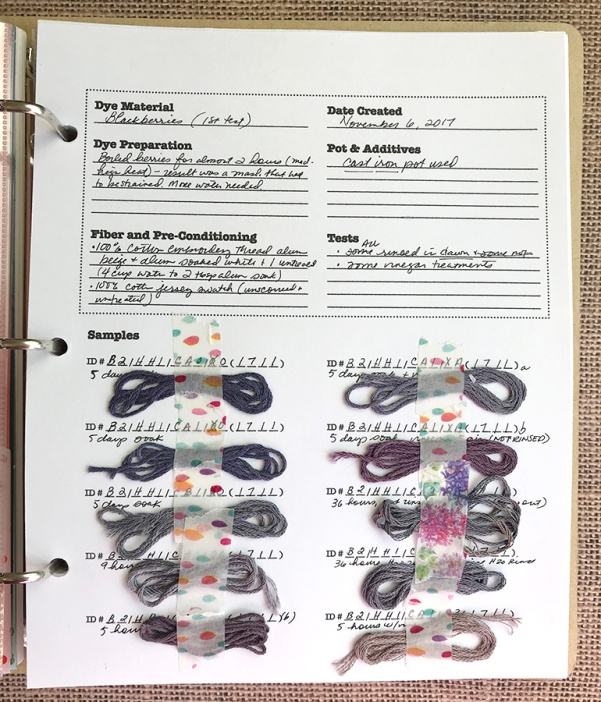 When dying with berries, the salt acts as a mordant (like alum) and helps your berry “stain” adhere to the fibers better. While they’ll continue to wash away over time under extreme conditions (clothing items, for example) the color is supposed to be more light-fast and resilient with the addition of salt.

And let’s be clear, we’re not talking a “dash” of salt here, either – we’re talking SALT. Most resources suggest a ratio of 1:16 when it comes to the addition of salt – meaning 1/2 cup of salt for every 8 cups of water. To put this in perspective, there are 16 cups to a gallon. If you’re dying a t-shirt, for example, you’re going to need at least a gallon of water (and a full cup of salt). Plan accordingly and buy the big container.

With the second run of tests, I dyed my threads in a hot dye bath with my fabrics. The more pinkish thread bundles in the photo below were the result of a vinegar dip after rinsing. I ensured the vinegar was rinsed well afterward to prevent any further color shifting or contamination of other threads.

In the same pot of fabric and salted thread, I also tried to over dye some commercially dyed Anchor threads. In treating these threads with both alum and salt they didn’t bleed in the slightest so there was no worry about them cross-contaminating the other materials (which were also pre-treated with both alum and salt).

My attempt to dye about 1 yard of fabric, including samples of unbleached muslin and cotton canvas, with a blackberry dye didn’t turn out quite as anticipated because I likely didn’t use enough berries. I only used 16 oz. of berries to about 2 gallons of water, the result was a rather weak dye pot that, when combined with unbleached fabric, resulted in a pale golden pink. I quite liked it though and left it overnight so it would get as dark as possible… however… in the morning when I rinsed them out I found that the fibers were back to a deeper blue. I haven’t tried to treat these with vinegar but I suspect the cotton fibers would behave the same as the threads did under the same circumstances.

In my previous mini-series of posts about cabbage dye I discussed some of my issues with fugitive dyes – that is dyes that don’t want to stay in the fibers where you’re trying to lock them up no matter how hard you try or what tricks you employ. Blackberries are another similar type of dye that can be problematic for the kitchen dyer as they require some additional TCL to produce results.

If I remember correctly, seeing the results achieved by Suzonne Stirling in her blog, Urban Comfort, was probably one of the first things that got me interested in natural dyes in the first place. Images from this post pop up all over Pinterest and rightly so as she provides a great no nonsense run down of the process of dying with blackberries.

As Stirling and many others share, a number of things can impact the outcome of your blackberry dye and I’ve experienced all of these first hand:

If you’re looking for additional help with blackberry and other natural dyes I’d suggest reading about the variety of ways Aneira Davies dyes her fabric with fruit, outlined in her article for Seamwork. And, although you can find many similar lists online, you can find a great selection of natural dye plants and the colors each material produces as well as sources of natural mordants and some key terminology about natural dyes at The Woolery if you’re interested in additional dying materials.

Next week I’ll cover dye made from black beans…