I love keeping a sketchbook, now. I used to hate it – I didn’t see the point and didn’t have the discipline. Fortunately I came to see the error of my ways and embraced the idea of a sketchbook or “process book” (as that may be a bit more accurate) under my own terms.

I talk with my students a lot about cultivating a good sketchbook practice and try to share examples of what a sketchbook can be in order to dispel myths or stereotypical ideas of what a sketchbook “is” or should be. This helps to a point but I know it my heart it’s really something that they’ll either “get” or won’t and just because they may not hop on board at this moment in time, it certainly does not mean that they never will in the future.

Because my own sketchbook is such a huge part of my process I thought I’d share bits and pieces from the last six months (or so). I’ve been looking back through my trusted friend a lot lately because I’m coming to the end of the book and I’m also trying to expand on my ideas and generate some new work – why not share some of this reflection (if only visually) here as well.

The following are details of entries which show a more obvious progression for the scientific imagery that I began working with to the metaphoric imagery based on medieval beasts and characteristics, botanical forms, and art nouveau ornamentation that I’m currently exploring. In my mind, I simply flipped from A to Q but then, when I go back through my sketchbook I realize that this isn’t true at all. I feel like there is something here that I haven’t “seen” yet if only I’m willing to explore some of these transitions a bit more specifically.

As Leonard Cohen says: “Those who are earnestly lost, are lost, and lost again.” Eventually I’ll probably just end up back where I started – which will no longer be the same place at all anyway. But then… “Where ever you go, there you are.” (Bob Dylan) 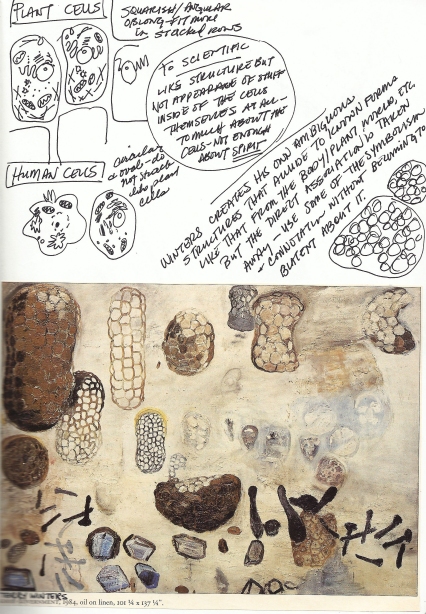 I’ve toyed on and off with the idea of juxtaposing circles, figures, and botanical drawings for awhile… you can clearly see some of these threads even in this sketch which was made about a year ago.

At a certain point I felt that I might be pushing the science connection a bit to hard – I felt as though I kept coming up empty with this direction but now, looking back, I realize that the feeling was more like brushing something with your fingertips that you just can’t reach. Out of frustration I pulled back and started looking at other artists more.

I revisited a lot of my favorite artists and went back through the copious amount of bookmarks on my computer and ipad at all the various artists I’ve been exposed to. I was once again drawn to artists like Burchfield and Emily Leonard but also found new inspiration from artists like Mondrian and Nesterov.

I began to explore the idea of the halo again – something I had done briefly during grad school in the form of “sainted” college students wandering through forests texting and talking on cell phones while being watched by wolves – yep that’s right – this was something I did for a brief time but I somehow ended up with a LOT of work from that couple of months… I haven’t used the halo/saint idea since but it came up again last year fairly strong. Perhaps this is why I was drawn to Nesterov so much – he kind of rocked my world when I found out about him! Same thing with the “Look of Love” pieces. 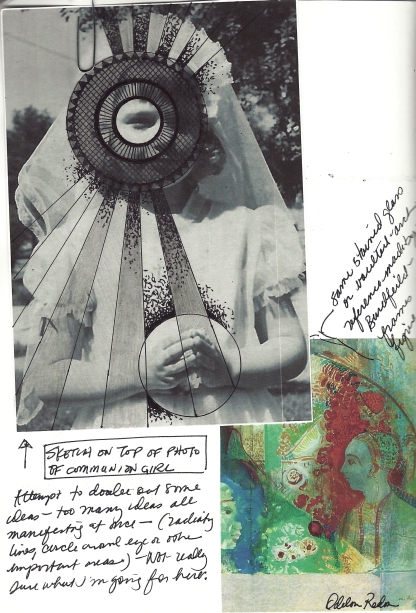 I experimented with various ways of integrating the ideas and visual imagery with some found photos I found at a thrift store last fall but never could get to where I was headed with these. About this time I also started a divergent path with the found photos (which I refer to as the “Spirits Within” work) but that’s for another time. 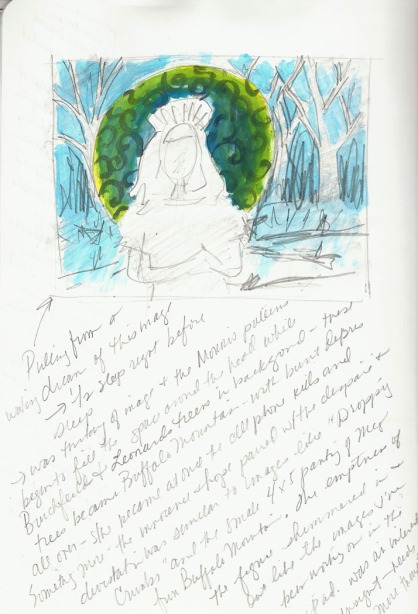 I really worked very little with the found photos in the end – I sort of harped on one picture of a little girl in her first Communion attire and the ideas sort of spiraled elsewhere from there.

Part of my hang up with a lot of this stuff is media – I’m not sure what media to work with. I feel restricted by my job and other obligations and so taking on work that is overly complicated or too large feels anything but conducive. I know that to make work at this point I have to do something that I can fit into my life – sad, but true. 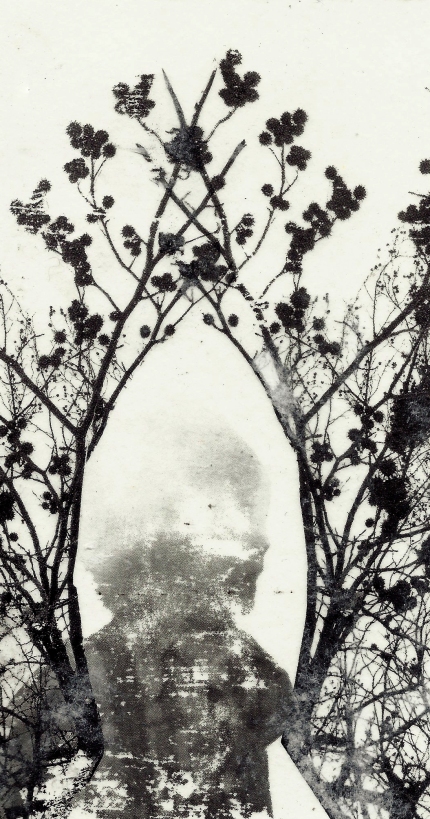 I particularly love toner – I always have. My instincts tell me that this will feed into the “Spirits” work more than the drawings I’ve been doing as of late.

In the vein of Burchfield with his trees that turn in to stained glass and the spiritual symbolism that somehow (despite a conscious awareness or desire to do so) always makes it into my work I’ve found myself enamored with the framework and organization of stained glass and also of art nouveau as a whole. 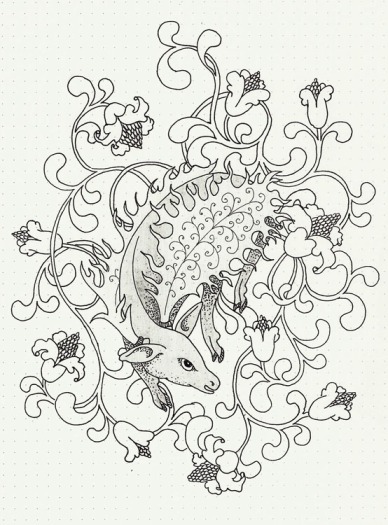 I’ve been working on combining medieval animal illustrations in illuminated manuscripts with botanical illustrations and so far I’m just frustrated. I keep working and I’m finally starting to see some things take shape. The deer above was one of the first studies I created. The drawing below is one of the more recent completed studies that have evolved from this drawing. 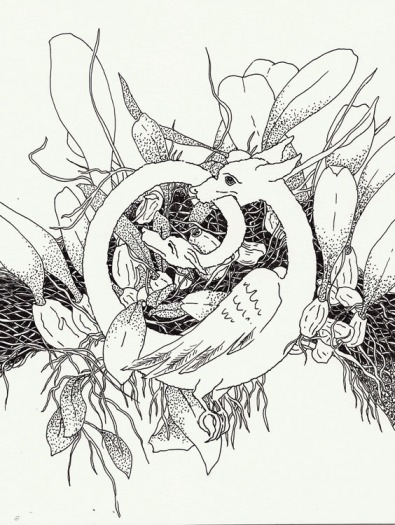 These types of works are starting to exhibit some of the characteristics I’m going for but I have a long way to go. Currently I’m creating about 3-4 of these 6×8 ink drawings a week and they take about 4 hours a piece. I am feeling more confident with the technical pen (gotta get back in the swing of it after 8 years of not using one) and am beginning to push different aspects to see what takes shape. These are simply studies though I do like some of them for what the are despite the fact that they’re missing the mark. I’ll share more about these in the next post.